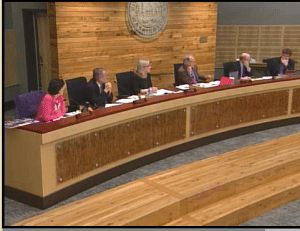 Council members indicate that heartfelt and thoughtful comments, emails, and letters are the most persuasive.  Please contact the City Council at citycouncil@ci.olympia.wa.us Your e-mail will be forwarded to each council member) or write Olympia City Council, PO Box 1967, Olympia, WA 98507-1967

Dear City Council Member:  The 150-acre woods surrounding LBA Park is a true gem. It is one of the largest remaining privately owned wooded parcels within the Olympia city limits.   Both owners of these parcels have expressed their willingness to sell. Its upland trails are unique to the Olympia area and provide aspecial place that hundreds of people in our community have used for decades, walking with friends and dogs, run, jog and mountain bike. Youth from the local neighborhoods frequently play there.  Over 5,200 residents have already signed a petition requesting the City acquire the Woods as a park. http://www.gopetition.com/petitions/cityof-olympia-conserve-nature-trails-and-forest-next.html  The LBA Woods lands can address the Olympia Park Plan’s longstanding goals for rectangular fields, a dog park, and a BMX park. Flat areas along both Boulevard and Morse Merryman roads could be used for those purposes without compromising the wooded trails.  The LBA Woods would provide a great benefit to the City and the surrounding City UGA because of their size and proximity to large neighborhoods. Residents can enjoy them daily without having to drive long distances.   Children need nearby nature, places where they can romp and roam, get exercise, and cultivate an affinity for the outdoors naturally and spontaneously. In 20 years, where will our children play?  LBA Woods will contribute immeasurably to Olympia’s quality of life as its population increases in both numbers and density. While density is necessary to limit sprawl, access to nearby green spaces mitigates the impact of density on quality of life.  To secure this legacy park, we ask that the Olympia City Council direct the City staff to conduct a conceptual feasibility study of alternative park uses (including sports fields, dog park, and BMX park) that could be located in the LBA Woods in a manner compatible with maintaining a high quality nature preserve and trail system.