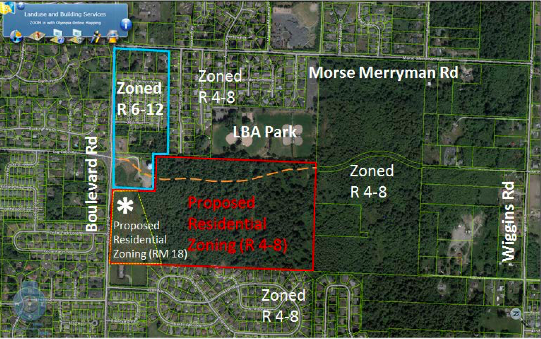 Olympia’s Planning Commission mailed a public-hearing notice on a rezoning of the “Bentridge” parcel of the LBA Woods to residences within 500 feet of current LBA Park and the LBA Woods.

Unfortunately, the notification was confusing and made it appear as though the LBA Woods Park Coalition and our supporters lost our campaign to save the LBA Woods from development. This is not so. Thanks to overwhelming public support for preserving LBA Woods, the City purchased the vast majority of LBA Woods (133 acres) for park and open space purposes and has no intention of using this land for residential development.

The confusion lies in the City of Olympia’s zoning rules. Oddly, the city has no “open space” or “parks” designation for any of its parks. The parkland adopts the surrounding neighborhood zoning as the default zoning. For instance, Watershed Park, Priest Point Park, and the original LBA Park itself are all zoned R 4-8, which means the land was originally zoned for 4 to 8 residences per acre and maintained that zoning despite the fact the land is parkland.

The LBA Woods parcels—“Trillium/Ashton Woods” and “Bentridge”—had existing zoning that is codified in the city’s zoning code.  The “Trillium/Ashton Woods” parcel was already zoned R4-8; the “Bentridge” parcel was already zoned as a “Neighborhood Village,” which included an approved master plan for the development of 501 homes. In order for the city to plan a public park on this parcel, the property must be rezoned or future development of the site would have to be consistent with the Neighborhood Village master plan.

Again, since there is no “parks” or “open space” zoning, the majority of the parcel will be rezoned to the R 4-8 of the surrounding neighborhood, of the Trillium parcel, and of existing LBA Park.

The areas zoned R 4-8 are, in fact, saved parkland and, despite this zoning, they will not be developed. These areas were acquired with park funding.

However, when the City of Olympia acquired the 71.86-acre “Bentridge” parcel, it purchased 59 acres with parks funding to be used as parkland and a 10-acre portion with general funds to be used as a mixed-use residential/neighborhood center site, and 2.8 acres with transportation impact fees to be used for the proposed Log Cabin extension road. The 10-acre neighborhood center site fronts Boulevard Rd. and are referred to by many park goers as the “old-growth scotsbroom field.” The City Planning and Development department is proposing to rezone this acreage to RM-18 (Residential Multifamily, 18 per acre) in order to accommodate medium-density housing and possible neighborhood center (possibly in the fashion of the Wildwood Center anchored by Vic’s Pizzeria and Spud’s Market).

Though this prairie-like area is overgrown with scotsbroom (an invasive weed) it also supports native fruit-bearing bushes which provide food and habitat for songbirds.  The LBA Woods Park Coalition hopes that future development designs will take this into account and adequately plan for the transition between the open and forested habitats.

The area shown as R 6-12 and outlined in blue on the map is existing zoning of a land adjacent to but outside the Bentridge parcel.

The area shown as RM-18 (outlined in the yellow dashed line) is the 10-acre area proposed for residential multifamily zoning that may be developed in the future.  Again, this portion of the property was purchased with the general funds (not park money or transportation impact fees).

The map also shows the alignment of a proposed roadway known as the “Log Cabin Extension Road.” The LBA Woods Park Coalition’s position on this road has been to request the City of Olympia maintain openness to evaluation changes to traffic patterns and reasonable alternatives to the road prior to committing any resources to design or construction of the road.

For several years, the LBA Woods Park Coalition has tracked this plan, which would have significant impacts on the woods. We have asked the city for a complete and detailed evaluation of its need and to consider reasonable before undertaking this project.

Please bring your questions and concerns!